HAVE YOU HAD ENOUGH OF SUFFERING?
Take back control of your life

Is this situation familiar to you?

Who is Pascale Piquet?
Pascale Piquet is an expert in co-dependency thanks to having lived and conquered it herself!

When pregnant with her first child, Pascale was betrayed by her unfaithful and abusive husband while also being harassed by his ex-spouse and his mistress. Living in a domestically violent situation, Pascale was finally pushed to the edge and assaulted her husband.  Following her divorce, she moved to Quebec in 2001 with her seven-year-old daughter and a second spouse who was 15 years her junior. He was an even worse choice than her first husband and her descent into hell continued.  The situation finally exploded when her second husband was escorted from the family home. He was handcuffed and led away by two policemen following a physical fight that broke out between the couple. Pascale suddenly found herself alone in a foreign country, facing job loss, a mountain of debt and suffering from generalised anxiety. Without family or friends for support, she turned to alcohol to manage her unrelenting angst. It felt like she was dying, her life destroyed, her confidence and self-esteem completely ruined.

Pascale went back to school and obtained a post-masters degree in NLP (Neuro-Linguistic Programming). Having regained her confidence and self-esteem, she rebuilt her life and wrote Le Syndrome de Tarzan (The Tarzan Syndrome) which became a best seller in the French market. Mixing humour with an authentic voice, the book recounts the emotional traps she had repeatedly fallen into throughout her life. It also shines the light on the problem she had been dealing with since childhood: co-dependency. This state is characterized by a lack of confidence and self-esteem that creates a variety of challenges in one’s life and paves the way for unfulfilling and emotionally draining relationships. Pascale decided to specialize in what she knew best. Through her kind, direct approach, she is able to pinpoint why her clients may continue to fall into negative behaviours, and most importantly, how they can liberate themselves from these destructive patterns.

Through her studies and her own life lessons, Pascale has been able to guide hundreds of clients and thousands of readers over the past 10 years, towards their own happiness. She shares her knowledge through live conferences, radio and TV appearances as well as through her books and columns. Now in an intimate and fulfilling relationship, Pascale is the perfect coach for those who are trying to let go of their emotional co-dependence.  Having conquered the condition without any outside help, Pascale firmly believes that her support as a coach is an excellent tool in aiding her clients in achieving their goals!

In Le syndrome de Tarzan (The Tarzan Syndrome), Pascale discusses co-dependency and introduces the reader to its two protagonists: the Desperado (the one who gives everything) and the Emotional Black Hole (the one who takes everything).  Two characters who cannot exist without each other: co-dependency is a dance that involves two partners! 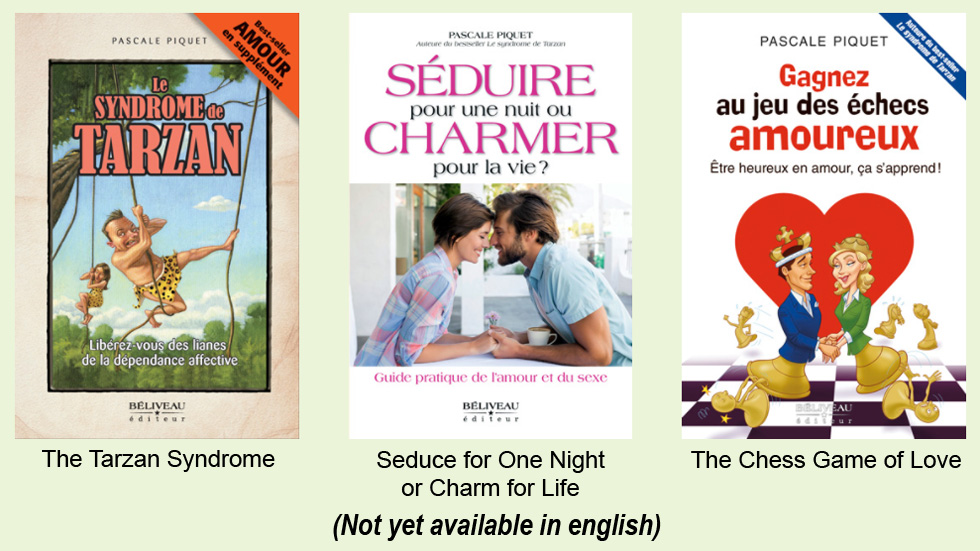 Read how Pascale’s coaching has changed the lives of clients around the world.
Testimonials…

My two-day coaching session was amazing and I feel honoured to have spent time with someone that has so much to share. If you would like to spend an enriching weekend learning about how to leave a difficult situation, especially a co-dependent one, I am convinced that a stay with Pascale will be very beneficial to you.

I feel so much more serene and much less alone. I have more confidence in myself and am starting to see life as a gift that brings lots of pleasure, whereas I previously viewed it as a battlefield where I had to prove myself.

I would like to thank Pascale for giving me the chance to live such an intense moment and to have welcomed me so warmly into her beautiful environment. I know that she is always there for me, should I need her. It is so reassuring!

I have come to realize how much co-dependency was affecting every area of my life. One year is all it took to reinvent my career, follow my passion and begin living a full life. I am still the same person and so much more!

My life has changed completely. Without my friend Chantal who opened my eyes and put me on Pascale Piquet’s path, I have no idea what would have become of me – I didn’t want to suffer anymore!

I would like to thank my friend Chantal, Pascale and all the lovely people of St-Jean-de-Matha that my coach introduced me to. I was a supporting character in my own life and thanks to everyone I met and thanks to Pascale (and even thanks to my dysfunctional relationships); I’ve taken over the starring role!

And I know that Pascale is always there if I need her.